The History of Massage Therapy in Ancient Civilizations 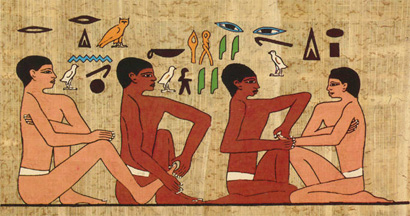 Pehr Ling, a Swedish physical therapist, was credited with the birth of the Swedish massage around 1776.  “Swedish massage” is the most commonly recognized representation of massage therapy, but it is not the earliest of it.

There is a plethora of evidence to support that massage therapy has been used as a natural healing method in many ancient civilizations including China, India, Japan, Egypt, Korea, Rome, Greece, and Mesopotamia. Some say massage began as a sacred system of natural healing for injuries, pain, stress, and illnesses. Others disagree and believe that massage was not advocated or practiced until modern times. Prior to that, it was believed to be incorporated in other healing methods.

The history of massage is not easily found from research and there is much debate over the exact details, but here’s a brief overview of massage therapy throughout ancient history.

The earliest written record of massage therapy was found in the Tomb of Akmanthor (also known as “The Tomb of the Physician”) in Saqqara Egypt around 2400 BCE. On the walls of the tomb was a painting depicting two men having kneading done on their feet and hands. Egyptians have been credited for the creation of reflexology based on that same painting.

Sources indicate that touch therapy was included in Ayurveda, the traditional holistic system in India. The first texts with details on Ayurvedic principles and practices were written sometime between 1500 and 500 BCE. Ayurveda took the approach that illnesses occurred when individuals lived out of harmony with their environment. Touch therapy was used within Ayurveda to help create balance. Sanscrit records have also indicated that massage had been practiced in India long before the beginning of recorded history.

Massage is referenced over 30 times in texts found in China sometime between 722-481 BCE;  the medical benefits of massage therapy were described in the time of the Yellow Emperor (2700 BCE). Around the same time those records were found, Bian Que, a Chinese physician, was recorded using massage therapy in medical practice.

Chinese massage methods originated from the principle that diseases and illnesses arise due to a deficiency or imbalance in the energy in specific pathways that represent physiological systems. Through massage and other specific bodywork techniques, energy flowed more harmoniously through these pathways, allowing the body to heal itself naturally.

Massage entered western civilization around 800 BCE when athletes employed massage to keep their bodies in peak condition. Hippocrates prescribed friction to treat physical injuries. He wrote, “The physician must be experienced in many things, but assuredly in rubbing.”

Throughout ancient history, massage therapy has been associated with the medical practice and helping individuals find balance in their lives. Today, massage therapy is a highly respected holistic healing approach that works with several other factors to help you achieve inner balance and relaxation. If it’s been a little while since your last massage or you’re new to massage therapy, give me a call with any questions you may have.

The History of Massage Therapy in Ancient Civilizations was last modified: July 30th, 2013 by admin

This article was posted in Massage and tagged history, Massage. Bookmark the permalink. Follow comments with the RSS feed for this post. Both comments and trackbacks are closed.